One of the most common tactics in chess that regularly appears in business is the skewer tactic.  In chess an important piece, usually the King or Queen is under attack from an enemy piece and has to step aside and allow a lower ranked piece behind it to take the ‘hit’ or be captured. In business it is the phenomena of a high ranking official looking for a scapegoat to take the blame for a situation or more commonly known as “getting thrown under the bus”. It’s a defining and often winning moment in a chess game. Likewise it’s a defining moment in the life of a company.

An ongoing situation that continues to make headlines is the use of tactics by Wells Fargo (WFC) in their campaign to increase activity among their clients by opening up bogus accounts.  I’ll skip all the details available in the media except to say that this is a perfect example of a B2C tactic that was played because having all the customer data available was an easy entry opportunity into making more customer accounts. The “scam” as it became known went on for seven years and made recent headlines just in time for election season. Yep our congressional overseers just couldn’t pass up the opportunity to grill WFC management about “what were they thinking?”

When WFC employees started to challenge the sales strategy through company hotlines, many of them faced a B2E business to employee tactic of being released from the company for tardiness or some such charge. One case went to court and was found in favor of WFC as just another disgruntled employee not making their sales numbers.

After a $185 million fine was assessed against WFC (without admitting wrongdoing) for the practices, the tactics really started to fly. Testifying before Congress the CEO of WFC was asked (more like grilled) by Senator Elizabeth Warren, “who in your direct line of reports, not the low level branch managers, but your direct reports did you fire over this scandal?” Yep she was actually imploring him to play the skewer tactic against one of his directs. His answer however was: “No one.” Ms. Warren’s response was: “then you should resign (yet another chess term) and give all the money you earned during this scandal period back to the company.” And within a few days the CEO in fact forfeited some of his options and resigned.

Why didn’t he play the skewer tactic?  It works because the CEO of JPMorgan Chase used it against his Chief Investment Officer during the London Whale crisis that cost his company $2+ billion is bad trades and he survived. One WFC official who was in charge over the business areas associated with the scam was already scheduled to retire and chose to do it sooner. But either the CEO didn’t know about the skewer tactic (highly unlikely) or chose not to play it costing him his job. Congress likely had too much evidence of the CEO supporting the sales practices with his “eight is great” email to allow the blame to be placed elsewhere in the organization.

The Tactics Continue to be Played

The tactics playable in the situation are far from over. Clients are taking C2B tactical action after becoming aware that these accounts were opened in their name without their permission and new account openings have dropped off dramatically at the bank. WFC has since refunded $2.6 million back to the customers. Local and state governments have stopped doing business with WFC over the scam using a B2B tactic to punish the bank. Employees who lost their jobs from the B2E layoff tactics now are using the E2B recourse of knowing the bank could be liable for damaging their reputation for finding employment elsewhere. The Wall Street Journal reported that “The banks new chief executive, Timothy Sloan, told employees in a town-hall meeting that the bank had found in a review potential issues in which the reports by employees of bad behavior to its ethics line may not have been handled appropriately.”*

The Skewer Tactic on the Chessboard

Meanwhile back at the chessboard, the following diagram taken from chapter 7 of Business on the Board, “The Power of Tactics – Twelve Tactics with Business Applications” illustrates the skewer tactic with devastating consequences for black. The black King is in check (under attack) from the white Rook on h8 and has to move up onto the 7th rank to get out of the check with Kf7, Ke7 or Kd7. But then the white Rook goes to Rh7+ attacking the King again and it must move up to the 6th rank or back onto the 8th rank. Whereupon white’s Rook plays Rxa7 capturing the black Rook and winning the game. The King survived but the game was lost. 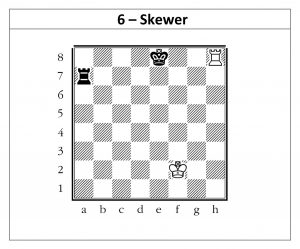 Tactics Can Make or Break Your Career

Business leaders who are strategically stronger and tactically sharper than their counterparts have a better chance of winning the game of business. Most importantly using the knowledge gained from Business on the Board gives you a place to practice your business and critical decision-making skills.  Our website www.businessontheboard.com has more information on how to get ahead in your career using these powerful strategies and tactics.